1960-1961: This season was devoted almost entirely to developing new talent amongst the club members. Competition practice occurred during morning hours while instruction for new members and show practice was an evening affair. Ski Shows were booked in Framingham, Ashland, Indian Ranch, and the Annual Jimmy fund show at Snug Harbor. A portable jump for road shows was built for $225.00. Many members participated in tournaments in the Eastern Region and added many trophies to the club’s rapidly growing collection. The club now has 105 active skiers!!

1961-1962: The club’s bid for the 1962 Eastern’s was sanctioned by the AWSA. A tournament committee was organized to run the tournament without conflicting with normal club activities. This Committee consisted of:
General Chairman: Andy Hoenig
Ass ‘t Chairman: Gerry Dion
Secretary: Gretchen Hoenig
Treasurer: Roger Lavoie

The 1962 Eastern’s was a great success with many club members comparing and bringing home trophies. Jackie Lynch qualified to go to the Nationals in Pine Mountain, Georgia. Howie Tryba jumped 107 feet to qualify for the Century Club. The club treasury realized a $1,000 profit. Six shows were enthusiastically received in Holliston, Glen Echo Ski Club in Charlton, The Jimmy Fund show at Snug Harbor, the Singletary Rod & Gun Show, and two shows at Indian Ranch. If all of this isn’t enough, a trip to Ocean Beach was enjoyed by members on August 20.  Glen Echo Ski Club and Menard Glass donated a glass-enclosed bulletin board to the Nipmuc Ski Club as a token of their appreciation for our club.

1962-1963: Shows were held at Indian Ranch on August 10th and August 24th. The Jimmy Fund Show as Snug Harbor on August 25th and the Singletary Show on September 9th. No tournaments were hosted by the Nipmuckers this year buy many skiers practiced and competed in many other tournaments throughout the Eastern Region. Seven skiers brought back trophies from the Eastern’s in Bridgeport, Maine and eight skiers were awarded the overall team trophy in Elkton, Maryland. 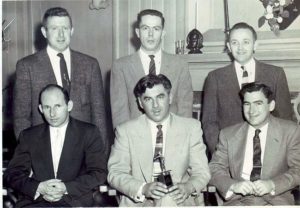 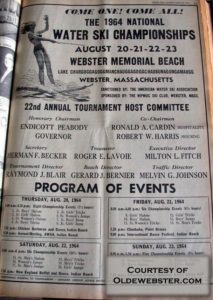 1963-1964: The club hosted the National Water Ski Tournament at Memorial Beach. Ron Cardin an Bob Harris were co-chairmen of the Host Committee. Ray Blair was Tournament Director. The town renamed Ben’s Cove to Nipmuc Cove in honor of the club. 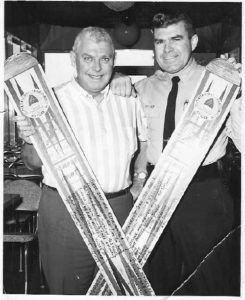 A cavalcade was used to promote the tournament and traveled all over New England. A new Century Resorter was raffled off to help defray expenses. This was the first AWSA sponsored national tournament that made a profit. Jackie Lynch was a member competing in this tournament. 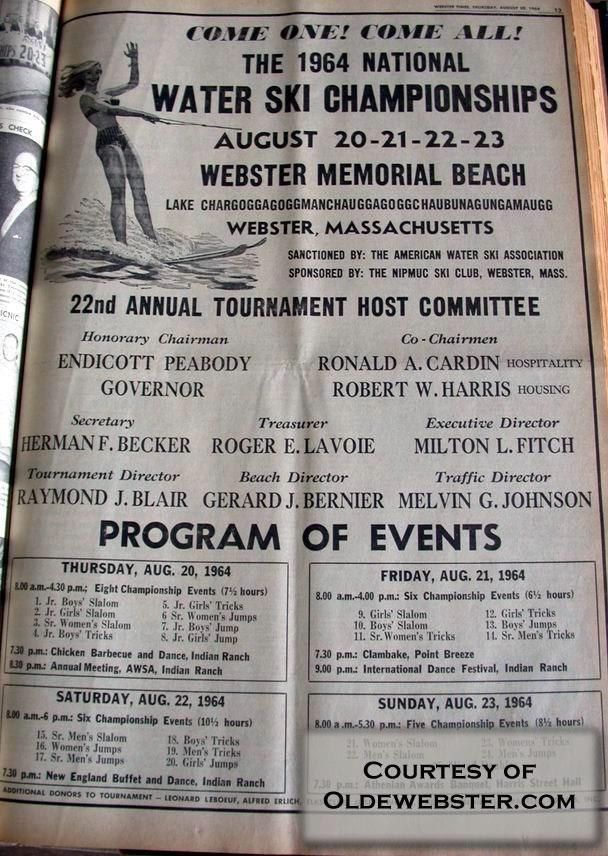 nationals-ad – add 5 other pics
1964-1965: The Bay State Open at memorial Beach was held with Norma Morse and Mary Ann Magiera as Show Directors and Howie Tryba as Tournament Director. A Storage shed was constructed as Snug Harbor for storing our equipment at a cost of $200 and the club purchased their first parasail at a cost of $400. Shows held this year were the Singletary Rod & Gun Club, Ashland and The Jimmy Fund show.

1965-1966: The New England Open Water Ski Tournament was held with Howie Tryba as Tournament Director. Also, the Jimmy Fund Show at Snug Harbor netted $1,200-1,500 this year. Other shows were at Ashland, Indian Ranch, and the Singletary Show.

1966-1967: The Eastern Regional Tournament was held at Memorial Beach on August 4-6. The club held an inter-club Novice Tournament on August 27th. Other shows were at Ashland, Mass., The Jimmy Fund Show at Snug Harbor and Singletary Rod & Gun Club. The annual banquet was held at the Colonial Club.

1967-1968: The last show to be held at Snug Harbor was to benefit the Jimmy Fund. In the latter part of 1968 Snug Harbor, the official home of the Nipmuc Ski Club since 1956, was vacated and demolished to make way for Route 52 and a new access road to Union Point.  Steve Zemsky jumped 102 feet in the Eastern Regional Tournament, qualifying for the nationals in Canton, Ohio.  The Banquet was held at Point Breeze 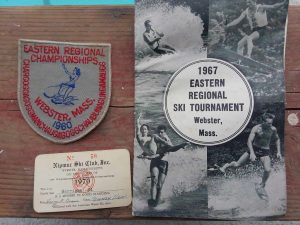 1968-1969: Shows were held in Coventry, R.I, The Jimmy Fund Show at Nipmuc Cove and the Singletary Show. The Bay State Open was held at Memorial Beach.

The Present Club Site (at the corner of Thompson Road and Union Point) was acquired in 1969 through a cooperative effort of Mary Ann Magiera & Mary Tryba and the Commonwealth of Massachusetts.  The annual banquet was held at Point Breeze.

1969-1970: The Jimmy Fund Show was held at Treasure Island and the Bay State Open Tournament was held at Memorial Beach.