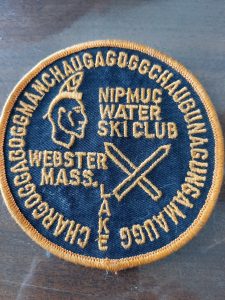 1954-1955: The Nipmuc Water Ski Club was established in the Winter of 1954 on the shores of Webster Lake. The ski club was organized by seven water ski enthusiasts – they were Gerry Bernier, Ray Blair, Gerald “Tate” Dion, George Hekowycz, Andy Hoenig, Gretchen Hoenig, and Roger Lavoie. In the winter of 1954 an opening meeting was held at Jesse White’s Marina. Two ski shows were held at Birch Island Pavilion and donations from these shows, totaling $132.00, were used to build the club’s first jump. Andy Hoeing was made chairman of the Jump Building Committee.

1955-1956: Several water ski shows were held during the season and were enthusiastically received by hundreds of spectators from all over. With the help of donations the ski club was able to purchase equipment. Members gathered twice a month on Tuesdays at Snug Harbor. The season ended with a banquet for members and guests at Snug Harbor.

1956-1957: With increased membership and legal responsibilities, the club was incorporated. During the past three years the club had progressed greatly and had been the greatest single factor in promoting and exhibiting the sport of water skiing in the Southern Worcester County area.

Several ski shows were held at various public and private areas and all were a huge success. Social events for members during the season and a year end banquet at Snug Harbor concluded a busy year.

At the Burch Island annual show, Alan Roy was the first member to perform the amazing stunt of water-skiing barefoot. The annual banquet was held at the Colonial Club with Laval Leboeuf receiving Honorary Life Membership.

1958-1959: During this season, the first out-of-town ski show was held at Cedar Lake in Sturbridge; all proceeds were donated to the Jimmy Fund. The season continued with outstanding shows at Birch Island and Snug Harbor.

Club members competed in tournaments at Lake Placid, Fort Meadow Lake and Greenwood Lake where Irv Piehler was the first club member to win first place in an AWSA sanctioned tournament and held the Eastern Boy’s Jumping Record at 84 feet.

Tournament was held at Memorial Beach under the direction of Andy Hornig. The winners in the mixed doubles event were club members Dave Lapierre and Ursie Bonczek. Following the tournament the club unanimously voted to pay their expenses to the 1960 Nationals in Minneapolis, Minnesota.

One of the highlights of the First Eastern Regional tournament was Gerry Seraphin demonstrating his one-foot barefoot and receiving a standing ovation. This was the first time anyone had accomplished this in the Eastern Region.